Even though Canada is on the forefront of cannabis legalization, we are still behind when it comes to a provincial cannabis delivery service independent of Canada Post. California’s Bureau of Cannabis Control (BCC) recently made steps to allow the delivery of cannabis products across the entire state. This also includes delivery to areas with local bans still currently in effect – according to NBC San Diego.

This latest move towards the transport of cannabis is backed up by Proposition 64 – California’s adult use legalization initiative that allows for statewide deliveries. Law enforcement officials have stated they would arrest licensed delivery drivers if they were caught in areas that prohibit cannabis sales. This is a catch 22 situation for delivery drivers and the consumers that may unknowingly live in these areas.

This doesn’t address the needs of sick patients that live an extended distance from cannabis dispensary’s in the United States most populace state. Banning any major opposition from California’s Office of Administrative Law the delivery service will go into operation. 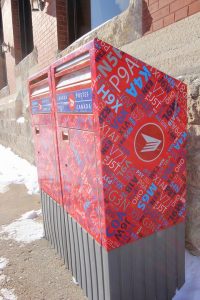 businesses and online dispensaries. There are currently 6 million parcels according to Canada Post that are back logged. A possible solution would be to hire more workers to keep up with demand instead of arguing with the federal government over the governments back to work legislation. The Canadian Union of Postal Workers (CUPW) says they will be filing the challenge with the Ontario Superior Court.-ctvnews.ca

The Canadian Union of  Postal workers claim their charter rights (health and safety standards, unpaid overtime) are being violated.

Cannabis store owners both offline and online have been feeling the pressure when customers don’t get their packages on time. People are simply fed-up dealing with Canada Post’s failure to deliver cannabis on a timely schedule. Canada Post has even gone so far as to discard medicinal cannabis packages they claim have a strong odour. Canada Post has no business flagging packages that have a suspicious odour. Having legalized cannabis packages destroyed puts cannabis dispensary’s out of pocket when it comes to compensating their customers.

These are just some of the reasons for why a private Canadian National Cannabis Delivery Service is imperative. The federal Post Office Department became a Crown corporation back in 1981. You would think that by now union issues could be resolved without hurting the customer. The ongoing logistical problems has resulted in many dispensary’s going weedless across Canada.

Marijuana was legalized in Canada on October the 17th under the Cannabis Act. We are still in the infancy stages of marijuana use across Canada. People not getting their cannabis products on time is just the tip of the iceberg. I don’t necessarily see the Canada Post debacle as a negative thing. This dilemma will force the AGLC (Alberta Gaming Liquor and Cannabis) and other newcomers to replace Canada Post as a delivery agent.

Check out our Quick Greens Xmas special, order now and get it hopefully before Christmas.